Band: The Stompin' Riffraffs – A Man and Three Chicks serve up some Blast Beat Rockin' 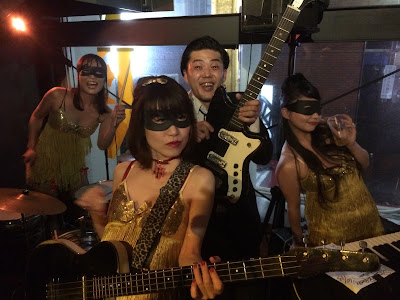 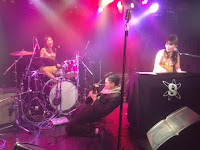 Japan has many good bands that are happy to simply slavishly copy their international rock heroes, but the best one are those that start in one end of the musical spectrum and – through luck or genius or both – end up somewhere else and completely unexpected. Take the amazing Stompin' Riffraffs from Tokyo and Fussa. Their musical base may be classic 50's rock-n-roll and rockabilly, and on record you could sometimes mistake them for a twangy revival band. But put them in front of an audience, and the magic happens. 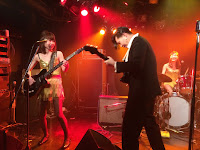 The energy and fun of a Stompin' Riffraffs show is so great it leaves everybody exhausted and smiling from ear to ear! On stage, they turn up the rock-n-roll to 11 and full-scale chaos ensues. Imagine if The Ramones had started out in Tokyo in 1960 instead of New York in the 70s, and instead of four skinny slackers with attitude problems, they were born as three cool chicks in gold lamé dresses and mysterious face mask, joined by a rockabilly guy in a sharp dinner suit. The Stompin' Riffraffs may not be punks but they share the same kind of energy as they race through old rock standards and their own compositions as if they were chased by the Roadrunner. Throw in a little outer space sounds courtesy of their signature Theremin and a lot of screaming, and that's as good a reference as any when it comes to this unique band! 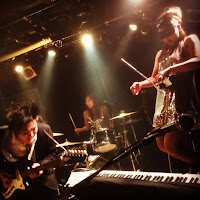 The Stompin' Riffraffs were started by siblings Nao (vocals, guitar) and Miku (piano, theremin, scream) and Saori (drums, scream) in 2006, and soon joined by Rie (bass, scream) (yes, they do scream a lot!). In addition to the standard rock setting, The Riffraffs make good use of the Theremin, the space-age instrument that sounds like something in between a woman singing and a cat squealing – in outer space! Their performances are full of energy, with Nao skidding around his knees like possessed, Miku bashing the keys with her hands, arms and feet (and sometimes whole body), Rie dancing and jumping straight out into the audience, and Saori banging away in the back, always with a big smile on her face. 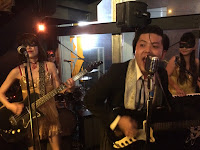 The name was inspired by the US title of a French new wave movie, The Riff Raff Girls. They first started appearing at local shows in Tokyo, in particular the Back From The Grave garage rock events, and soon started playing all over Japan. They have gone to the US several times, including New York, Los Angeles and San Francisco as well as appearing at the Viva Las Vegas rockabilly weekend. The have also done shows in the UK and recently made their first festival appearance in France. After their first official album Horror Show in 2011 and a clutch of vinyl singles on various labels, in 2014 they signed with Wild Records in Los Angeles, which specializes in rockabilly, rock-n-roll, garage and other roots music. Their first Wild release A Man and Three Chicks is out now, with more to follow!

There really is nothing like seeing the band live, but videos can at least capture some of the madness of a Riffraffs show! First up is a collection of live clips, including their appearance as The Joker and three Catwomen at the Halloween Ball, filmed by Mario aka Tokyo Gorehound.

You can also catch them in the official music video for Phantom Rock off their latest album!

And finally, here they are appearing at the Bethuene Retro festival in France this year!

Where to hear them

If you have the chance to make it to Japan, make sure to catch them live – they play regularly all over Tokyo and often in other cities. Keep up with their busy schedule on their blog!

If you absolutely can't get to Tokyo right now, the next best thing is to find them on YouTube, or this live recording from WFMU Radio, New Jersey.

You can also hear them on several vinyl and CD records, although most of their earlier releases are hard to come by except at their live shows. The Stompin' Riffraffs' first US album, A Man and Three Chicks, is available on Amazon or directly from Wild Records.

Blog with live schedule
Posted by Lars Erik at 12:20 AM