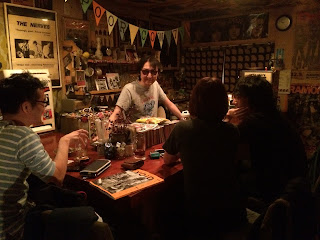 Poor Cow has been attracting musicians and music fans to the lively neighbourhood of Shmokitazawa for over 7 years. Started and run by Fifi and his wife Taka, it is a great place to listen to music, catch up on shows, and meet like-minded people. Owner Fifi is a legend in his right, having been in classic Tokyo rock bands like American Soul Spiders, Teengenerate and Firestarter. Right now he is most active singing in the power pop outfit Tweezers, which includes members from several other famous Tokyo bands, including Supersnazz. 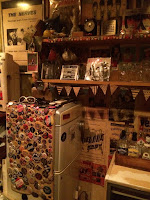 Although Poor Cow is often associated with power pop – the 70s-derived music genre that combines crunchy guitars and sweet melodies, exemplified by bands such as Badfinger, Big Star and The Raspberries – the door is open to any musical taste. Fifi has brought in his own music collection, which contains thousands of vinyl LPs and CDs. You can find just about any genre there, from punk to prog and from glam to garage and everything in between. 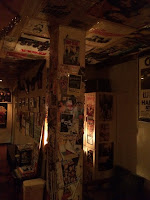 With its Shimokitazawa location, Poor Cow is popular as a watering hole among local musicians, who often turn up after band practice. When foreign bands are in town they also more often than not end up at Poor Cow, and the bar has played host to everybody from legendary girl pop singer Nicki Corvette to Sweden's surf punkers Sonic Surf City.

Pop in to Poor Cow and you are guaranteed a good time any time! You will hear great music, meet interesting people, and get the low-down on the local music scene. And be sure to ask Fifi about his many stories about his rock-n-roll life – like that time he played with The White Stripes in Tokyo and only 10 people showed up...

For the most part, Poor Cow operates as a regular bar, with the customers choosing the music from the collection or their own brought-in records. However, sometimes there are low-key shows with local or foreign bands, who might stop by Poor Cow to play "secret" gigs between their regular appearances at the traditional Tokyo live houses.

A popular semi-regular event is the E-Street Shuffle, which takes place on Tuesdays about once a month. The rule is that you bring a song you like, on any medium – vinyl, CD, iPod, or Edison roll if you are so inclined – and give a short talk about it before playing it to the other guests. A fun way to hear new music of all kinds! 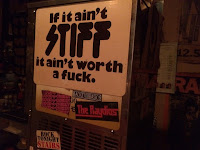 Poor Cow has a small but efficient drink stock. Regular draft beer is ¥500, and highballs start at ¥400. There is whiskey, Japanese sho-chu and other liquors to mix with.

How to find it

Poor Cow is in the hip neighborhood of Shimokitazawa, which is worth a trip in itself. From Shinjuku, take the Odakyu line, which originates there, so any train is fine! From Shibuya, you get on the Keio Inokashira Line – again, all trains will take you to the Shimokitazawa station.

At Shimokitazawa station, get out through the South exit and turn left. After walking with the old train tracks on your left (they are now lowered underground and subject of development) you then make the first turn right. Passing a Village Vanguard shop to your right, you turn left at the first intersection. Continuing only a few meters, Poor Cow will be to your left. It is on the fourth floor, atop a Chinese restaurant. It is not the easiest place to find, but keep your eye out for the red lanterns of the Chinese restaurant and the small sign in the entry to the right, and you will be well rewarded!

Poor Cow does not have a web site, but you can follow Fifi's Instragram account for updates.
There, you can also keep up with what Fifi is listening too, and check if anyone interesting has turned up at Poor Cow tonight!

Email ThisBlogThis!Share to TwitterShare to FacebookShare to Pinterest
Labels: Bars